In traditional boiler systems, 180 F water is used to heat up water at 100 F from storage. The difference between the hot and cold fluid is called the ‘approach’, and in the case of boiler systems is on the order of 80 F (180-100). In solar applications we want the collectors to be running as close to the storage temperature as possible so that they operate at maximum efficiency. Achieving this requires that the approach be brought down to the range of 10-20 F, which requires a significant de-rating of the output numbers of most heat exchangers that are rated for boiler applications. The guidelines provided below are based on low approach solar temperatures where the maximum heat load is determined from typical operating temperatures under full sun conditions. When sized to these principals, the indirect system will operate within 5% of open loop efficiency for brazed plate units and on the order of 10% for tube bundle applications. 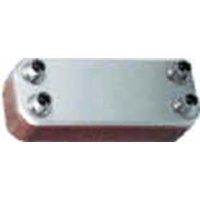 Because of their high efficiency and compact size, brazed plate heat exchangers can be economically sized for very low approaches on the order of 10 F. This low approach results in system efficiencies that parallel direct designs. As a supplier of heat exchangers for custom solar water heaters, SunEarth carries two brazed plate units under the SunPlate tradename. The smaller SPL31 series can handle 9 ft2 with each plate while the larger SPL110 has a capacity of 50 ft2 per plate. For more information on sizing SunPlate units visit the SunPlate page on our website by clicking here. Pressure drops across the SunPlate units at design flow rates are typically 1.5 psi.

Immersed tube bundles typically operate at much lower efficiencies than brazed plate heat exchangers. This happens because they rely on natural convection to transfer heat away from the bundle. Due to lower operating efficiencies, it is only economical to size tube bundles for a 20 F approach. Although actual heat transfer depends on bundle configuration, a good sizing guide is to use a square foot of tube bundle for every 14 ft2 of collector array. This sizing should result in an approach on the order of 20 F. Pressure drops across tube bundles at design flow rates are typically on the order of 1 psi. 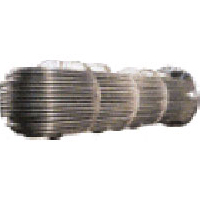