Fun Things to Do in Orlando Other Than Disney 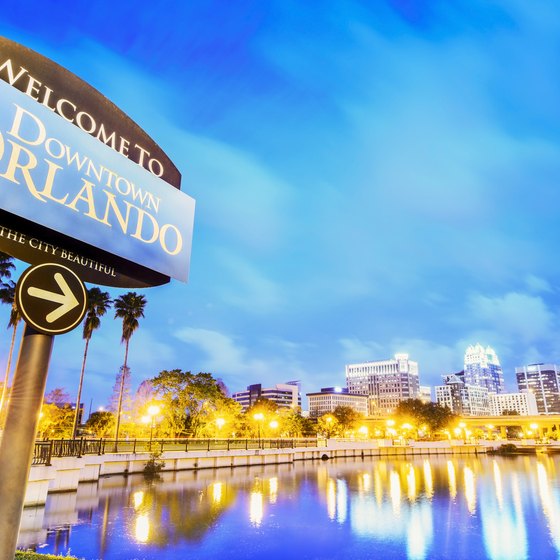 Fun Things to Do in Orlando Other Than Disney (Photo: )

To some, Cinderella's castle might as well be an official symbol of Orlando. But for most people, the Disney World experience gets old eventually – not to mention, painfully expensive. When you're looking for fun things to do in Orlando, branch out by exploring what else the city has to offer. You won't be bored. This is a city that caters to tourists, so there are tons of things to do in Orlando besides theme parks. Feeding an alligator might even prove to be more thrilling than a ride on Space Mountain.

Rides last about 20 minutes, which might make you think twice about paying the steep ticket prices ($15 to $28 as of 2019, with only certain Florida residents getting the cheaper rate). Packages are also available for those visitors celebrating special occasions. Expectant couples can even pay to have the wheel lit up in blue or pink for an hour, as a special way to reveal a baby's gender to their loved ones. Sunset is the most popular time to board the ICON, and for good reason. Expect to spend extra time in line if you get to the wheel around this time.

This attraction is part of ICON Orlando 360, a massive entertainment complex near Universal Studios. The complex also includes other ticketed attractions, such as Madame Tussaud's Wax Museum, SEA LIFE Orlando Aquarium and SKELETONS, a museum devoted to (you guessed it) bones. ICON Orlando 360 is also home to a ton of restaurants and some shops. There's live music in the complex's courtyard each night, so it's a nice place to go for dinner and drinks.

Face Your Fears at Gatorland

It's only about 13 miles south of Downtown Orlando, but visiting Gatorland is a little like walking into a swamp. This is one of Orlando's oldest and most beloved attractions. Gatorland was opened by founder Owen Godwin in 1949, and the park has been owned by his family ever since.

Part theme park and part wildlife preserve, Gatorland sits on 110 acres. Guests can zipline over alligators, board off-road vehicles for park tours, hand-feed gators and participate in daily shows. Gatorland also offers a nighttime experience in which guests can find gators using nothing but flashlights. (Some of these experiences require the purchase of a separate ticket.)

Fun as Gatorland's attractions are, the real stars are the live animals. Gatorland is home to about 2,000 American alligators, including very rare white gators and newly-hatched babies. Crocodiles are also kept in the park. Gatorland has some other animals for guests to see up close, including wild cats, rare birds, snakes and tortoises. What Gatorland lacks in modern design it makes up for with a ton of attractions and relatively cheap ticket prices. It's an Orlando landmark.

Go Under at Discovery Cove

Discovery Cove is right in the heart of Orlando, just across the street from SeaWorld Orlando. If you want to snorkel, dive and swim with dolphins, options are limited in Central Florida; remember, Orlando is far from the coast. But at Discovery Cove, all those activities are doable. It bills itself as an all-inclusive day resort, which means your admission gets you free breakfast, lunch, snacks and drinks as well as towels, snorkeling gear and access to a bunch of features.

Those visitors who aren't interested in getting up close and personal with dolphins can spend the day splashing in Serenity Bay (which is always kept at a balmy 85 degrees) or floating down the soothing lazy river ride. Discovery Cove also has an aviary that's home to tropical birds and an area called Freshwater Oasis, where you can wade and snorkel among otters and marmosets.

Because admission gives you access to unlimited food and drinks and activities, experiencing Discovery Cove doesn't come cheap. Ticket prices are above $100 per person, and you should plan to spend a full day there. Adding the dolphin swim experience will add about $50 to your ticket price. Discovery Cove also has some package ticket deals. Pay a little extra to get a park-hopper ticket that grants you entrance to SeaWorld, Aquatica and Busch Gardens. Hotel package deals are also available.

Winter Park is technically its own city, but considering it's only about 10 miles northeast of Orlando, it's hardly a hike to get there. And getting there is worth the effort, because Winter Park feels like a million miles away from a theme park. This is an elegant enclave that was once a wintertime resort area for wealthy Northerners, hence its name. It retains that same luxury spirit today.

Start your trip to Winter Park by wandering the Park Avenue shopping district. Some visitors say that the area reminds them of quaint European towns. Park Avenue is also the place to be come mealtime, as the street is lined with upscale eateries and cafes. Next, kick back in the shade-filled Central Park. If you're lucky your visit will coincide with one of the many festivals and celebrations that are held there each year. (As you might expect, Central Park is on Park Ave, so it's impossible to miss.) You might also opt to board a pontoon boat for an hour-long cruise around Winter Park's crystal blue lakes.

Cultural and historical activities are also popular within Winter Park. The Charles Hosmer Morse Museum of American Art, called The Morse for short, houses a large collection of works by Louis Comfort Tiffany, who designed the famous Tiffany lamps and stained glass and ultimately became design director at his father's company: the famed Tiffany & Co. The museum also houses a rotating collection of exhibitions by American artists. The Albin Polasek Museum & Sculpture Gardens is also a can't-miss.

Looking for things to do in Orlando today? Head to the Tibet-Butler Preserve. It isn't a massive park, but it's beautifully maintained – and the fact that it's only about 20 miles southwest of Downtown Orlando means that visiting this county park is an easy half-day trip. The preserve has miles of easy walking paths and admission is free.

This park is an especially great destination if you're traveling with kids and need a break from theme parks. They might grumble about the idea of hitting a nature preserve, but because the trails are so wide and flat it's an easy walk for even little kids. If you can, plan your visit for a Saturday morning. The preserve offers free EcoSaturday programming that's geared toward the whole family. The butterfly garden is a hit with kids, too.

Disney is far from the only theme park game in town. If you want a break from Mickey Mouse but still want to experience thrill rides and childlike wonder, consider a trip to The Wizarding World of Harry Potter. Located just southwest of Downtown Orlando, this theme park is part of the larger Universal Orlando resort.

The magic-themed park is actually made up of two lands, split between the two Universal parks. The Wizarding World of Harry Potter – Diagon Alley is located within Universal Studios Florida, while The Wizarding World of Harry Potter – Hogsmeade is contained within Islands of Adventure. That means that, to visit both, you'll have to buy tickets for both parks. (A shrewd financial move on Universal's part!) Guests who buy park-to-park tickets, which give them access to both parks on a single day, can even ride the Hogwarts Express train between the two.

If you can only visit one park, a coin toss might be your best bet to decide between them. They each have a beloved thrill ride (Harry Potter and the Escape from Gringotts is in Diagon Alley; Hogsmeade has Harry Potter and the Forbidden Journey) and plenty of Potter-themed scenery and shops. Hogsmeade sits in the shadow of a recreation of Hogwarts, which is lit up on some nights during an extravagant light show. But it's important to know that both Harry Potter lands are fairly small, so you're better off just picking the Universal park that most appeals to you.

See the Sights at Disney Springs

Okay, sure, it's a Disney property. But visiting Disney Springs is a very different experience from visiting the Magic Kingdom or one of the Disney parks. For one thing, admission is free. That's enough to set it apart from the theme parks right there. Disney Springs is essentially one huge open-air entertainment complex. It's filled with restaurants, bars, gift shops and attractions, plus enough Disney-themed elements to entrance younger visitors.

One of the highlights is the Aerophile. It's a tethered hot-air balloon that rises 400 feet in the air, giving passengers beautiful views of the Disney parks and Orlando beyond. The balloon accommodates 29 people, and each trip takes a little less than half an hour. Tickets cost about $20, as of 2019. Even though the balloon is tethered, going up is still dependent on the right weather conditions. Your trip isn't guaranteed to happen until it's time to board.

Blast Off at Kennedy Space Center

Whether you watched the moon landing in person or have just a passing interest in the cosmos, you'll find something to love at Kennedy Space Center. Cape Canaveral is only about 45 miles east of Orlando, making Kennedy an easy day trip. Not traveling with your own car? No problem. Many area tour companies offer half- or full-day bus trips. Pay one price to get roundtrip transportation and admission to the center itself.

If you're expecting some dusty or dull museum, think again. Kennedy Space Center is both an active launch site and a state-of-the-art visitors attraction. The part that's open to the public is divided into five separate mission zones, each with its own themed activities. For example, the Behind the Gates mission zone is where visitors can board buses for tours of historic launch sites. In the zone called Shuttle: A Ship Like No Other, climb into an astronaut simulator and stand in the shadow of Space Shuttle Atlantis.

While it's possible to do Kennedy Space Center in half a day, there's so much to see and do that you really need the better part of a day to get to it all. There's a lot included in your ticket price ($41 to $57, as of 2019) but real space enthusiasts can also pay extra for add-on experiences, like having lunch with a real astronaut.