Andersen Air Force Base is a United States Air Force base located in the United States territory of Guam. Along with Naval Base Guam, Andersen AFB was placed under the command of Joint Region Marianas on 1 October 2009. The two bases are about 30 miles apart at opposite ends of the island.

Two years after Anderson Airforce Base was placed under the command of the Joint Region Marianas, Patrick Russell stated, "The Department of Defense is one of the largest energy users in the world,". "Fortunately, energy is an area in which we can easily cut costs simply by being more vigilant. It is a great opportunity to affect change and show our desire to improve stewardship of the taxpayer dollar."

As the cost of energy soars, it has become more and more prevalent that the Air Force's long-term effort to improve energy security through efficiency succeeds. This year, Andersen has spent a reported $50 million to sustain energy on-base, $20 million more than the previous year.

"Energy is becoming more expensive and we are seeing that increase each fiscal year," Mr. Russell said. "In order to stop the trend, it is important to be aware of energy conservation methods you can implement on a day-to-day basis in your own home."

According to the Energy Policy Act of 2005, Executive Orders 13423 and 13514 and the Energy Independence Act of 2007, all federal agencies are required to reduce their resource consumption, reduce greenhouse gas emissions and increase the use of renewable energy used in federal facilities.

"By the year 2013, 7.5 percent of a facilities' energy consumption must come from a renewable source," Mr. Manaloto said. "Renewable sources include wind, ocean energy, solar energy, municipal solid waste, and landfill gas to name a few. Through a combined effort, these goals are more than attainable. The great thing about it is folks like you and me can make it happen simply by putting forth a little effort. "

As part of these continued efforts to reduce energy consumption and increase renewable sources at Anderson Air Force Base, Pacific Solar & Photovoltaics recently installed an array of Flat Plate Collectors, manufactured by SunEarth of Fontana, CA to provide pre-heated water for domestic use on base. 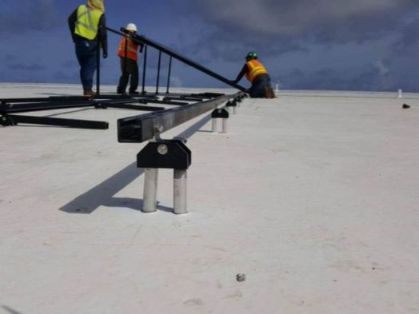 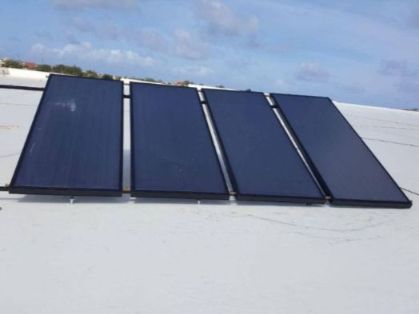