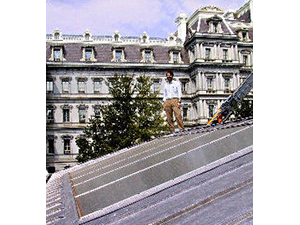 Steven Strong was there when the ribbon was cut to unveil a solar hot water system on the East Wing of the White House then occupied by President Jimmy Carter. In late August, he was back at the White House when a small solar PV system and two solar thermal systems quietly began operation after being installed on buildings in the presidential complex in Washington D.C.

Strong, president of Solar Design Associates said his company was retained by the National Park Service early in 2002 to design the project.

Two SunEarth solar thermal systems were also installed, one to heat the pool and spa and one to provide domestic hot water.

Photo Above: Steven Strong with one of the solar thermal systems installed at the White House in August. The old Executive Office Building is in the background.